Buckle up: we’re still in Ethiopia, and this post promises to be just as long as the last. We arrived in Lalibela wrecked from our trek in the Simiens, but did our best to perk up with a fresh mango smoothie before heading to tour some of the famous rock churches. To be honest, that first day a lot of the information our sweet guide shared with us went over my head, but even in my groggy state it was impossible not to be impressed. The churches date back to the 11th century and are dug straight into massive chunks of basalt, modeled after Jerusalem in order to save the country’s Orthodox Christians the arduous pilgrimage. Pilgrims shrouded in white circumambulated each carved monolithic church, bending down with effort to kiss the steps of each entrance. The insides were equally impressive, with intricately carved stone pillars and frescos covering the walls. We ended our first day as the sun set at St. George’s, a massive Orthodox cross cut into the earth, seen in every Ethiopia tourism brochure. That night we had dinner with some new friends at Ben Abeba, a kooky hilltop restaurant, where after a local gin and lemonade the owner let us play with their rescued baby klipspringers, and now I can die happy. 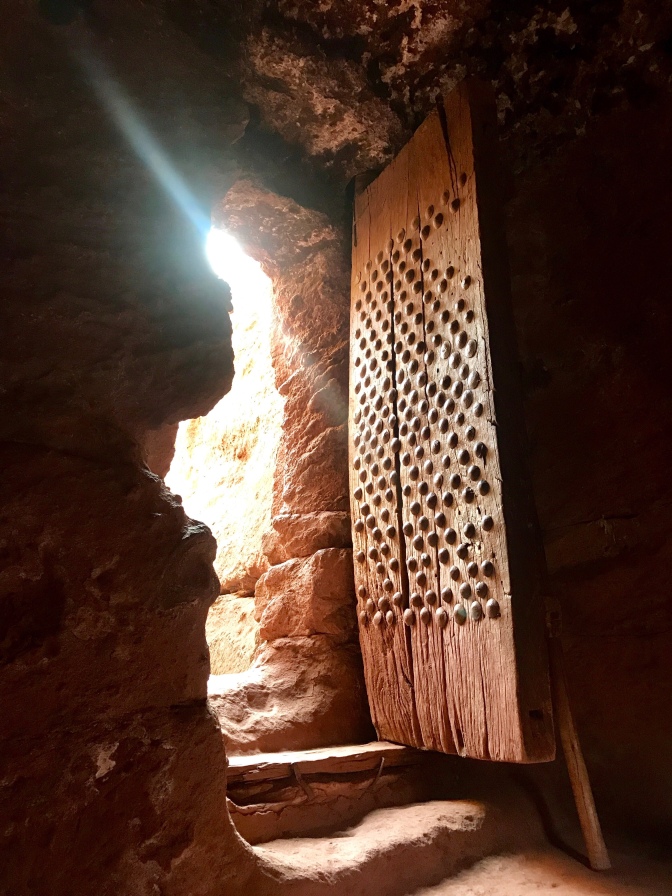 The next day I woke up feeling a bit more human, and set off early to see more churches in the southeastern group before the heat of the day. The first church, Bet Gabriel, happened to have a holy day, and the men chanting inside was beautiful. From there we toured Bet Abba Libanos, taking a pitch black tunnel underground to Bet Merkorious, meant to symbolize the path from hell to heaven. Our final church was Bet Immanuel, built into the rock face, and maybe my favorite. Apparently pilgrimage to these churches guarantees a ticket to heaven not only for you, but also a free ride for seven generations of your descendants. So, between Lalibela, walking the Camino de Santiago, dunking in the Ganges, and being baptized and confirmed in the Methodist church, I should be set. 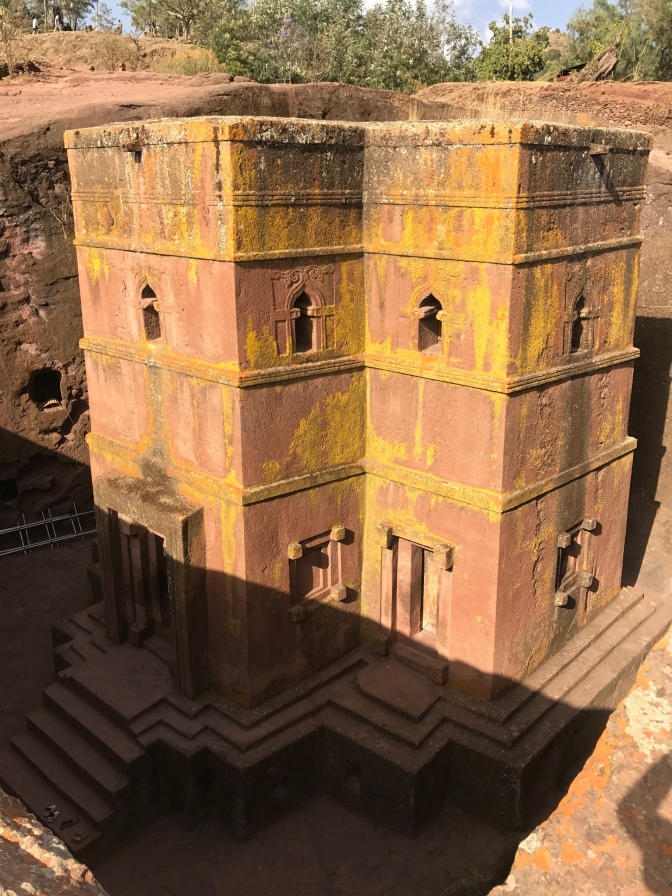 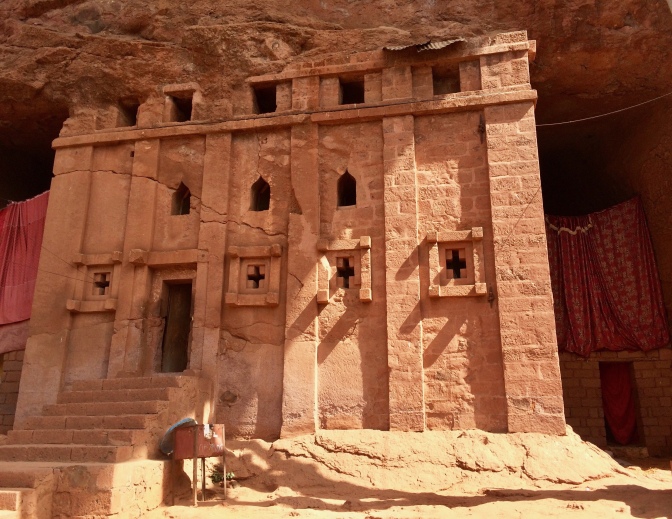 After a long, uninspiring day spent in a cramped minibus driving north to Mekele, we set off early the next day for a tour of the Danakil Depression. Initially the drive reminded us of Oman- rocky hills dotted with acacia trees, the kind of scenery that makes you thirsty. We carried on, past dust devils and half mummified carcasses of camels, passing colorfully dressed men and women standing near huts seemingly woven from a tapestry of twigs. Eventually camels and donkeys began competing for road space, and we knew we had officially entered the Afar region. After sweating through lunch we picked up an armed escort, Omar, his teeth chipped into points, a look considered beautiful by the Afar people. Our drive took us to more than 300 feet below sea level, where we exited on the salt flats, an ocean of white extending as far as the eye could see in every direction. Here we watched a seemingly endless parade of camels loaded with salt blocks the size of encyclopedias, the song ‘Lantchi Biye’ coming from our Jeep keeping time perfectly with their steps. A short drive down the road brought us to Lake Assal, where our caravan of Jeeps circled up for a sunset dinner, wine flowing freely, distant camels still parading past.

That night we slept on open air cots, with what felt like gale force winds making sleep nearly impossible. We rose with the sun, and a short drive to Dallol transported us to another planet, where a carnival fun house of surreal reds, purples, oranges, yellows and greens all swirled together on a mad painter’s canvas. The Earth’s crust is separating here, tearing apart along three deep rifts, the geologic wonders of the area evidence of the birthing process of a new ocean. All morning was spent visiting pools of sulfuric acid, walking past bubbling geysers and winding through labyrinths of intricate travertine formations, in awe for the entirety of our visit. 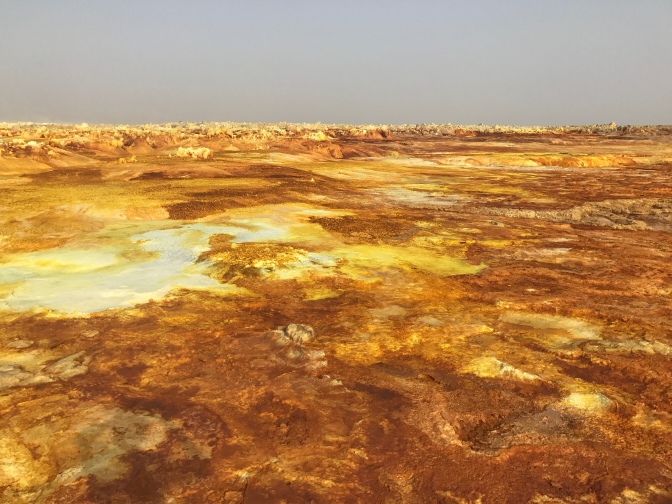 By 10am it was well over 100, and the temperature coupled with humidity made any extended time spent out of our air conditioned car challenging. After stopping by a clear, emerald salt pool, we then toured an entire landscape of salt, towers and buttes carved out by the wind and rain. Next came a bubbling methane lake, oily to the touch and the smell almost unbearable, alongside connecting pools of what looked like simmering applesauce. Another stop was an area where the salt deposits reach over half a mile deep, used for mining by the Afar people for centuries. In the past salt was used as currency, but now it mostly is used for animal salt licks, and the laborers earn about a dollar a day for their efforts. This meager pay hardly seems worth the exhaustive process of pulling up big blocks with a heavy axe, shaving these pieces into perfect squares, loading them onto camels and walking for four days to the nearest town to sell them.

That night was spent in a guesthouse, where a quick bucket shower changed my life. Walking around town, the cries of ‘ferengi!’ coming from every house and people wanting to touch my hair quickly grew overwhelming, and we retreated to enjoy the company of fellow caravaners from Spain, Kenya and Germany. The next day more tourists came to join us, and most of the day was spent driving to Erta Ale, the ‘smoking mountain.’ Our 4WD was put to work as we crawled across lava fields, feeling like human pinballs. A seven mile drive took us nearly two hours, and honestly it would have been faster to walk had the heat not killed us first. We arrived at a military enclave near the Eritrean border for dinner, and set off for the summit around 8pm. 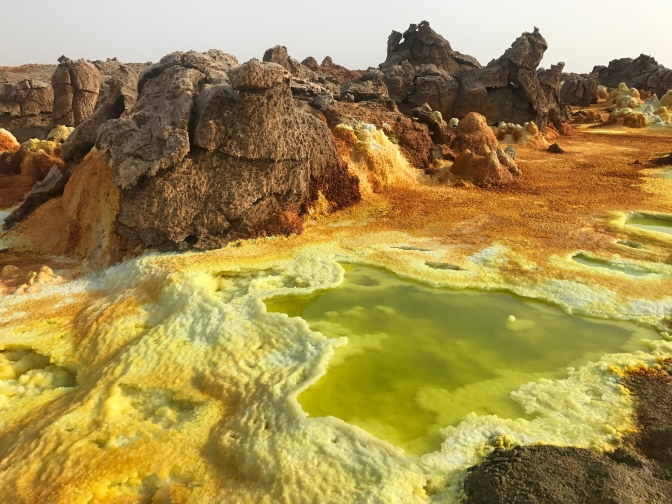 The night started out cloudless and clear, with a beautiful moonrise revealing the way. Slowly clouds covered the stars, and distant thunder began to rumble. About a mile from the summit the wind shifted, and despite assurances from our guides that it only rains twice a year and this was not the season, rain began to pelt our backs while lightening and thunder started crashing all around us. Totally disoriented, we were terrified and in pretty much the worst place possible. We ran for the top where we found a little leaky stone hut and packed in together like sardines, completely soaked and shivering.

About a half hour later the storm subsided, and we walked five minutes to the lip of the crater, crunching across freshly dried lava that felt about as stable as styrofoam.  As we approached the glowing red smoke we could hear magma bubbling below, the entire mountain top transformed into a giant witch’s cauldron. Unfortunately the smoke made seeing magma impossible, and each time the wind shifted we found ourselves choking on a toxic cloud, panicked, with our eyes and throats burning. After giving up we returned to ‘camp,’ where the twin mattresses brought up for us on camels were completely soaked. Gary and I put the drier of the two on top, using one sleeping bag as a buffer on the bottom, and another as a blanket for the top. Our horrible night’s sleep didn’t matter too much, as we were up in three hours to resume magma hunting, still without luck. Even so, the sunrise was beautiful, the first light revealing the swirling dried lava surrounding us.

After hiking back down to the military base we had a breakfast of French toast and Nutella washed down with a cold beer, and then pinballed our way back to the main road. From there we continued to Lake Afrera, sea foam green with light lapping waves. We splashed around in the lake and in the nearby hot springs feeling incredibly refreshed before a final lunch and long, sleepy drive back to Mekele.

The next day we grabbed a minibus to Hawzien, the gateway to the churches of the Tigray region. Still unshowered from the Danakil, on a whim we walked to the Gheralta Lodge for what wound up being our fanciest meal in Ethiopia. For the first time ever I somehow ate more than Gary, and after lunch we climbed up some nearby boulders to digest in the sun. Later, a thunderstorm chased us away, even though we were visiting during the height of the dry season. There was a surprising amount of rainfall everywhere we went, with locals consistently caught off guard. I imagine with climate change this will become more and more common, as unpredictable weather patterns upend what has been the norm for millennia.

Another early morning found us zipping through the countryside in bajaj, bound for three cliffside churches. The scenery in Tigray totally swept me off my feet, with dramatic craggy cliffs rising like tidal waves out of the red earth, not dissimilar to the American West. The hassle over guides and tipping and constant demands for money nearly ruined the day, but ignoring all that, the hiking to the remote churches, as well as the actual churches themselves, really were stunning.

We first climbed up past cacti and junipers to Maryam and Daniel Korkor, two churches built directly into the rock face, and then cut across the valley to Abune Yemata (rhymes with Hakuna Matata). Everyone had warned us about how scary the climb to this particular church was, but after we watched a bunch of octogenarians scramble up the cliff face we felt pretty unconcerned. After the little climb we followed along a narrow pathway cut into the cliff, a sheer drop on our left, finally entering the hidden church. After admiring the paintings and seeing an illustrated bible from the 6th century we were hurried out as mass began, impressed by the church’s secret location and well-preserved traditions.

Today, for the first time in three weeks, we’ve allowed ourselves the luxury of sleeping in (we still woke up at 7am) and doing absolutely nothing (if I’m being completely honest, lots of time has been spent alternating running to the toilet). Our time in Ethiopia has felt more like visiting several distant alien planets, each experience completely unique and varied. I am fully satisfied and completely exhausted, and hope resting my weary bones today will give me the energy needed to figure out how to navigate back to Addis, and for the upcoming two weeks in Egypt.