Oh, well hello! I really did have grand plans to write about all of the wonderful things that happened in August: my friend´s magical wedding in a little town straight out of Beauty and the Beast, wine tasting in Bordeaux, climbing the Dune du Pilat in Arcachon, revisiting my old study abroad haunts in Paris, and discovering that bohemia still exists in Berlin. Hopefully at some point I still will. However, even with ample time to relax in Toulouse, the hours somehow slipped away and I now have been walking as a pilgrim on the Camino de Santiago for 21 days. 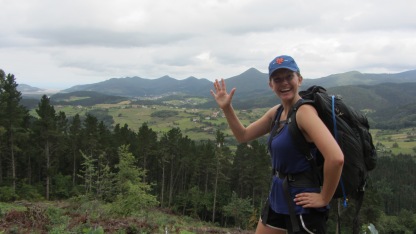 Currently I write from Oviedo, where I am taking my first (and hopefully only) full rest day, as I transition from the Camino del Norte to the Camino Primitivo. This morning I visited the cathedral to rub the feet of ‘El Salvador’, a pilgrim tradition since the 11th century. I was surprised at how moved I was while sitting to pray, grateful that I have been able to walk nearly 480 km carrying everything I need on my back.

So far there have been days where I think that I´ve never been quite so happy in my entire life, and others that I´ve found absolutely, entirely, utterly miserable. I began my camino in Irun, where the first person I met was Mary from Portland. A camino veteran, she put my mind at ease, and we had plenty to talk about on the first 28km trek to San Sebastian. We were so busy enjoying each others company that we perhaps walked the first 18km a bit too enthusiastically, and as a result suffered in silence the last 10, which were seemingly endless switchbacks, stairs and hills. When we at last arrived in the city we still had to walk another hour across it to reach the albergue, and watching people at the beach enjoying ice cream was a special kind of torture.

The next morning I don´t think I’ve ever been so sore, an entire body ache that lasted the next two days. I was not prepared for the bruising on my hips and collarbones and this pain, in addition to my throbbing legs and feet, made it impossible to sleep at night. Just as I was able to drift off I would relax into a different position and be jolted awake in discomfort, where I would then lay, listening to the symphony of snoring around me and dreading another day.

On day three while limping from Zarautz to Deba I was fortunate enough to meet Sebastian, an older Basque man out for his daily 17k stroll. Perhaps noticing my pinched face and tender steps, he began talking with me and extended his walk to show me a detour that circumvented the stairs. He left me with crackers, a bar of chocolate, great advice learned from his previous 10 caminos, and the promise that there would always be a fellow pilgrim on the path to help me when I was in need.These moments of grace and beauty have continued throughout the camino, and many times, for lack of words or gestures sufficient to convey my gratitude, I´ve been left only with tears.

And the people! The people I´ve met have been my saviors. Max and Christophe, the German father/son duo with whom I spent my first week, always smiling and always well-prepared with a GPS in hand. It was Christophe who told me that walking the entire 780 km of the Camino Frances was nothing compared to how difficult it was to return home feeling changed, and realizing that nothing else had (an idea that has nagged at me ever since). Odile, my french maman who played tourist with me as we visited the Caves of Altamira and the Capricho de Gaudi. After speaking only Spanish for three days my brain was beginning to feel nearly as tired as my body when I met Damien from Huntington Beach, California, and after an easy day of conversation we found an authentic Mexican restaurant in the middle of nowhere, giving me a taste of comfort and home. Tom, who takes a break from the responsibilities of family and his job at the World Bank every 10 years to do the camino, and who valiantly shooed a group of bulls out of the pathway while I cowered in the blackberry bushes. The unflappable Ywona from Poland, fluent in 6 different languages and fighting the good fight at the UN. Julia from Austria, freshly graduated from physical therapy school and always willing to lend her expertise for any aches and pains. Affable and generous Michael from Ireland, who I felt truly would give someone the shirt off his back just to make them happy. Beatriz from Quebec, whose complaints about the loud ´snorking´ in the albergues every night endeared her to me forever.

I could go on and on, it´s amazing how much spending a week, a day, an hour with someone can impact and inspire you. When not making friends on the road, I´ve found that I enjoy solitude. I like the silence, with only the sounds of my breath, my footsteps, the bells of cows grazing, the wind telling secrets to the trees. I also am taking full advantage of the gift of time to let my mind wander freely. When not singing outloud, I daydream. Sometimes I play dictator of the world, where I make up all the mandates that would exist on Planet Aly. My daydreams get weirder from this point on, so best that I stop here.

And what else? The albergues are a mixed bag, usually they are a giant room filled with rows of bunk beds to host between 20-40 pilgrims, although I´ve also slept on the floor in a gym, in a convent where they had a special pilgrim blessing, and in a youth hostel directly on the beach, where the sounds of waves lulled me to sleep (until the mustachioed french man snoring like a demon in the bunk below me made earplugs an immediate necessity). I have a killer tan, but since I am always walking west, it´s only on the left side of my body. I am developing a strangely intimate relationship with my feet- I gently rub them with Vaseline every morning and swaddle them in $20 socks, I coax and cajole them to continue walking for just a few more kilometers, and I finish the day by massaging them and carefully inspecting them for any hint of impending blisters (none so far!).

Also, I am eating an amazing quantity of food. On one particularly demoralizing day I bought a baguette and a jar of nutella and sat on a bench alone until both were gone. Several french people have called me a ´gormande´, which I was told means glutton (allegedly without the negative connotation). An older Spanish man, while rubbing his distended belly after polishing off a menu del dia told me about how he actually gained 3 kilos during his last camino, and I think I might be on the same path.

More than anything, I am consistently impressed by the power of rest and rejoicing. At the end of every day I feel totally spent, as if I could not possibly take even one more step. My primal instincts kick in, and it becomes unclear what is more important: food, cleaning myself or sleep. Yet somehow, after a shared dinner over plenty of wine, a prayer and a night´s rest, I am able to wake up and walk another day. Thank you to all of you who have been sending me your thoughts, prayers, positive energy, good vibes, etc; I am convinced it is the only thing getting me through.

For now I will sign off in the hopes of taking full advantage of this day to rest with the prayer that I can continue on tomorrow, and finish the last 316 km to Santiago. Ultreia and buen camino!